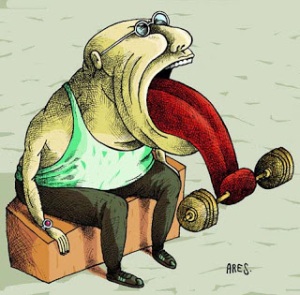 Swallowing problems in older patients are not uncommon. The clinician needs to be diligent to inquire about dysphagia because a large number of these patients will require treatment.

to document the presence of OD following hip fracture surgery, and the factors associated with OD.

one hundred and eighty-one patients with a mean age of 83 years (range: 65-103) admitted to a specialised orthogeriatric unit were assessed for OD post-surgery for hip fracture. Pre-admission, intra-operative and post-operative factors were examined to determine their relationship with the presence of OD.

OD was found to be present post-operatively in 34% (n = 61) of the current population. Multivariate logistic regression analyses revealed the presence of pre-existing neurological and respiratory medical co-morbidities, presence of post-operative delirium, age and living in a residential aged care facility prior to hospital admission to be associated with the post-operative OD.

these results highlight that OD is present in a large number of the older hip fracture population. Early identification of OD has important implications for the provision of timely dysphagia management that may prevent secondary complications and potentially reduce the hospital length of stay.

Background: The purpose of this study is to determine whether elderly subjects with severe brain atrophy, which is associated with neurodegeneration and difficulty swallowing (dysphagia), are more susceptible to lower respiratory tract infections (LRTI), including pneumonia.
Methods: The severity of brain atrophy was assessed by computed tomography in 51 nursing home residents aged 60–96 years. The incidence of LRTI, defined by body temperature ≥ 38.0°C, presence of two or more respiratory symptoms, and use of antibiotics, was determined over 4 years. The incidence of LRTI was compared according to the severity and type of brain atrophy.
Results: The incidence rate ratio of LRTI was significantly higher (odds ratio 4.60, 95% confidence interval 1.18–17.93, fully adjusted P = 0.028) and the time to the first episode of LRTI was significantly shorter (log-rank test, P = 0.019) in subjects with severe brain atrophy in any lobe. Frontal and parietal lobe atrophy was associated with a significantly increased risk of LRTI, while temporal lobe atrophy, ventricular dilatation, and diffuse white matter lesions did not influence the risk of LRTI.
Conclusion: Elderly subjects with severe brain atrophy are more susceptible to LRTI, possibly as a result of neurodegeneration causing dysphagia and silent aspiration. Assessing the severity of brain atrophy might be useful to identify subjects at increased risk of respiratory infections in a prospective manner.

The swallowing mechanism changes significantly as people age, even in the absence of chronic diseases. Presbyphagia, a term that refers to aging-related changes in the swallowing mechanism, may be linked to many health conditions and presents itself in distinct ways. Swallowing disorders are also identified as a major problem amongst the elderly population living in nursing homes.

The study sought to determine the prevalence of swallowing disorders in nursing home residents, to identify the relationship between self-perceived swallowing disorders, cognitive functions, autonomy, and depression, and also to analyze which variables explain the score of the Dysphagia Self-Test (DST). For this purpose, the researchers chose to apply a survey conveying questions on demographic aspects, general health, eating and feeding, as well as instruments to assess functional performance and the 3 ounce Water Swallow Test.

The sample consisted of 272 elderly people living in eight nursing homes in Portugal. Six did not sign the informed consent form. Of the total, 29% were totally dependent, 33% were depressed, 45% had cognitive impairment, and 38% needed help with feeding. About 43% of the individuals reported having problems related to eating. Regarding the DST, 40% showed signs of dysphagia. With respect to the 3 ounce Water Swallow Test, 38% revealed at least one of the symptoms, wet voice being the most prevalent. Correlation measures showed that age had no linear association with the DST score although correlation with the Barthel Index and Mini Mental State Examination was found to be significant. A linear regression model was estimated with the DST score as the dependent variable and the MMSE and BI scores, gender, age, education, the Geriatric Depression Scale score, 3 ounce Water Swallow Test, and diagnosed conditions (such as neurological disorder, dementia, and cardiorespiratory problems) as explaining variables.

Results showed a high prevalence of dysphagia signs amongst a nursing home population. For the purpose of the present study, both a subjective and an objective assessment were applied. Results pointed to a significant statistical relation between objective and subjective measures, thus indicating that a self-perception test should be included in the assessment of swallowing disorders in a nursing home population. Notwithstanding, it should not be used as a single or principal measure as it is influenced by the individuals’ cognitive condition.

PURPOSE: This review aims to identify psychometrically robust assessment tools suitable for measuring elderly dysphagic patients’ performance in eating for use in clinical practice and research. METHOD: Electronic databases, related citations and references were searched to identify assessment tools integrating the complexity of the eating process. Papers were selected according to criteria defined a priori. Data were extracted regarding characteristics of the assessment tools and the evidence of reliability, validity and responsiveness. Quality appraisal was undertaken using developed criteria concerning the study design, the statistics used for the psychometric evaluation and the reported values. RESULTS: Eight of fourteen identified assessment tools met the inclusion criteria. Three assessment tools were specific to dementia, two were specific to stroke and three targeted a range of neurological and geriatric conditions. The rigor of the assessment tools’ psychometric properties varied from no evidence available to excellent evidence. Only two assessment tools were rated adequate to excellent. CONCLUSION: ‘The Minimal Eating Observation Form-Version II’ to be used for screening and ‘The McGill Ingestive Skills Assessment’ to be used for treatment planning and monitoring appeared to be psychometrically robust for clinical practice and research. However, further research on their psychometric properties is needed.

Watanabe K; Nakaya M; Miyano K; Abe K
Am J Otolaryngol; 32(2): 156-8, 2011 Mar-Apr.
ABSTRACT
A procedure for laryngotracheal separation was performed on 5 elderly patients in poor general condition to prevent habitual aspiration pneumonia. Intractable aspiration was relieved in all the patients with no major postoperative complications. In this intervention, a modification of the procedure previously reported, the anterior part of the tracheal and cricoid cartilage was removed, and the subglottic mucosa was sutured to fashion a blind pouch. This procedure could be adjusted even in cases of severe laryngoptosis or after high tracheostomy. Laryngotracheal separation is likely to be useful as a simple and safe procedure even for older patients. If this comes to be, it will serve as a valuable intervention in today’s aging society.
ACESSE O PERIÓDICO